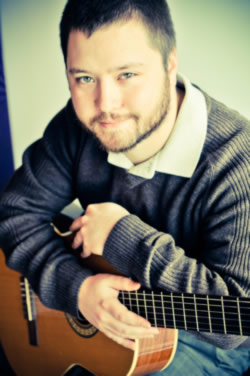 Tyler Belding has over a decade of experience both teaching music and performing. Under the direction of guitarist Michael Strutt, he completed his Bachelor of Music at the University of British Columbia in 2011. Throughout his academic career, he received many scholarships and awards for excellence in performance and academics.

Mr. Belding started teaching at MASTERY in 2011 and has helped many students reach their musical goals. He has taught guitarists at all levels of skill from beginner to advanced, and in all genres of music. Also, he has extensive experience teaching the Royal Conservatory of Music method in all levels of classical guitar. While the majority of his experience has been teaching the guitar he has also taught electric bass, ukulele, theory, and MASTERY Garage Bands.

He has performed as both a soloist and an ensemble/band member in venues such as the Chan Centre and the Douglas College â€śArts at Oneâ€ť series. He was a semi-finalist at the 2008 Northwest Guitar Festival in Seattle, Washington and has played in many master classes with well known classical guitarists such as Andrew Zohn, Judicael Perroy, and Daniel Bolshoy. His compositions have been premiered in several concert series including Vancouver Pro Musicaâ€™s â€śFurther East, Further West.â€ť