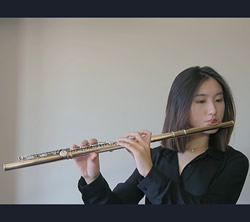 Siliang Wang received her Masterâ€™s of Music from the University of British Columbia in May 2021. She earned her bachelorâ€™s degree from the Central Conservatory of Music (Beijing, China) in 2018.

In 2009, she won the 3rd Prize in the Beijing International Woodwinds Competition. She gained the 2nd Prize and the Excellent Performance of Chinese Piece Prize in the China Flute Association. In 2016, her woodwinds quintet won the Wahaha Chamber Music scholarship and joined the Chamber Music tour in the same year. Siliang was the private teacher of Nova Scotia Youth Wind Ensemble in 2020 season. In 2021, Siliang won 2nd place in the competition held at the CanAmerican Flute Symposium. Siliang is currently working towards her Doctoral degree at UBC School of Music.