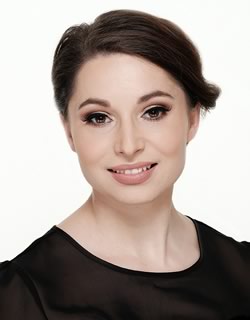 Sian Colman-Black began her classical voice training in her early teens and ultimately was accepted to the D.I.T Music and Drama Conservatory in Ireland to study classical voice – attaining a BA Hons in Music Performance and Pedagogy in June 2014. Her teaching career to date has included individual, private and group lessons within the Conservatory and The Independent Theatre Workshop, Dublin, Ireland. She believes in empowering students to have a grounded technique enabling them to embrace all musical genres and encouraging them to have an interest and passion for music and the Arts. Her students have consistently achieved distinctions in appropriate exams, and her method of preparation for auditions has led many of her students to attain roles in major productions. She comes highly recommended by those with whom she has worked (Guys and Dolls). Alongside these she regularly appeared in sacred settings both solo and choral she performed varied works to include, The Messiah (Handel), Carmina Burana (Orff), St John Passion and St Matthew Passion (Bach). with (testimonies available on request).

Performances to date include work in various genres. Working in productions with the Music & Drama Conservatory in Ireland her performances include such classics as, Cinderella (Cendrillon, Massenet), Orpheus in the Underworld (Orphée aux enfers, Offenbach) and The Merry Widow (Die lustige Witwe, Léhar). Her work in Musical Theatre/ Operetta span works by composers such as Gilbert and Sullivan (H.M.S Pinafore), Rodgers and Hammerstein (South Pacific) and ‎Frank Loesse.

Alongside this she has been involved in opera with Lyric Opera Productions Dublin Ireland, under the direction of Vivian Coates Artistic Director. She worked as part of his Creative/Stage Management Team on La Bohème and Tosca (Giacomo Puccini), The Merry Widow (Gilbert & Sullivan) and The Turn of the Screw (Benjamin Britten). Paralleling this she has worked in musical theatre on various productions such as Oliver and The Snowman. In 2015 she worked extensively on a newly commissioned piece The Abominable Snowman composed by Brian Irvine and lyricist John McIlduff.

Listen to the performance from the 10th Anniversary Gala Concert: