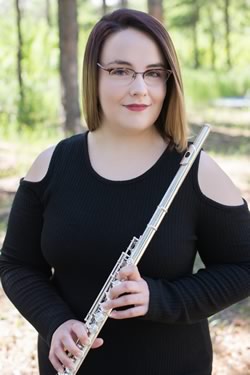 Mikyla Jensen began piano lessons at the age of three and completed her ARCT in piano performance from the Royal Conservatory of Canada at the age of only 17. Jensen fell in love with the flute, graduating from the University of Regina (Saskatchewan) in June 2015, receiving a Bachelor of Music degree with great distinction in flute performance under the tutelage of Marie-Noelle Berthelet (Regina Symphony Orchestra). Mikyla was the winner of the University of Regina Concerto Competition in 2014, appearing as a soloist with their orchestra in 2015 and has won numerous awards and scholarships in both performance and academics from the University of Regina from 2011 ‚Äì 2015. She completed her master‚Äôs degree in flute performance at the University of Manitoba, under the direction of Laurel Ridd (Winnipeg Symphony Orchestra), Layla Roberts, and academic advisor Allen Harrington. She studied there under the prestigious University of Manitoba Graduate Scholarship while researching the history of solo-flute music. Her thesis entitled ‚ÄúSolo Flute Music Between 1763 and 1913,‚Äù which can be found in the UofM music library, highlighted the lesser-known solo flute words of that time. Jensen recently graduated from the University of British Columbia with an MA in music theory (2020), focusing in performance analysis of late Classical and early Romantic music and tempo fluctuations in deceptive and evaded cadential passages, under the tutelage of Dr. √àve Poudrier and Dr. Alan Dodson. She had the wonderful opportunity to be an assistant teacher to multiple music theory and ear-training courses while studying at UBC. Her thesis titled ‚ÄúComparison of Performed Tempo Changes at Deceptive and Evaded Cadences‚Äù is published in the UBC cIRcle academic journal in Electronic Theses and Dissertations (ETDs) 2008+.

As an avid music teacher of over ten years in flute, piccolo, Barque flute, piano, music theory, music history, and ear-training, Mikyla enjoys working with students of all ages and abilities from beginner, university and college level, and adult students. In the summer of 2020, she studied under the renowned teacher Kathy Blocki in KinderFlute method and is excited to now be offering KinderFlute classes at MASTERY. At MASTERY, Miss Mikyla is known for her smile, positivity, and organization to nurture your child‚Äôs musical ability and challenge them to learn as much as they can and always keep asking questions. She maintains a busy performance career outside of the school and is constantly asking her students to join her on stage.

Listen to the performance from the 10th Anniversary Gala Concert:
Curves (I: ‚ÄúMagical & Woven‚Äù) by Ian Clarke