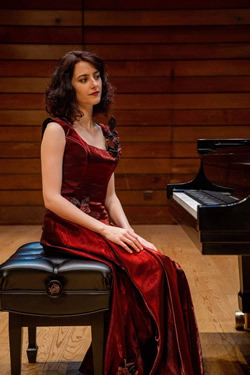 Letizia Pent, Italian pianist, born into a musical family, has performed successfully as a soloist in several music festivals in Turin. In Washington DC she was a finalist during the Washington International Piano Competition leading to a performance at the Kennedy Center. She regularly performs as chamber and collaborative pianist Additionally she is an experienced stage dancer and theatre performer. During her music studies, Letizia has been involved in master classes with many international pianists such as Fabio Lutz, Aleksandar MadĹľar, Nikita Fitenko, and Joaquin Achucarro. She has also studied composition with Giulio Castagnoli. After graduating with the highest marks in Turin where she was a student of Pietro De Maria in the Pinerolo Music Academy, she spent one academic year in 2016 at the Royal Conservatory of Brussels studying with Piet Kujiken.