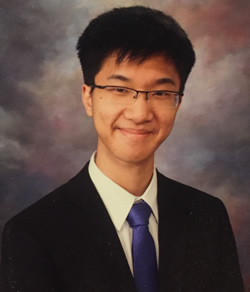 Keelan Hui has his Bachelor’s of Music degree studying the saxophone under the instruction of Dr. Julia Nolan at the University of British Columbia. He is a member of the Odyssey Saxophone Quartet, comprised of his peers at UBC, which has performed diverse repertoire at various events, such as the VSO Day of Music, ChamberFest, and WindFest. Additionally, he has worked closely with the indie rock band girlsnails and played in their final performance in CiTRâ€™s annual competition, Shindig, for which they placed first out of twenty-seven local bands.

Keelan first experienced the joy of making music by learning to play the piano and, eventually, earned his RCM Grade 10 Certificate with first-class honours. Along the way, he learned to play the saxophone and fell in love with its capabilities in many styles of music. Having studied both piano and saxophone extensively, Keelan has tackled a wide range of repertoire and greatly developed his skills as both a soloist and chamber musician.

As a teacher, Keelan strives to create a fun-filled and comfortable learning environment for the student. He is passionate about inspiring excitement for music within his students, whether it be for Pirates of the Caribbean or Pictures at an Exhibition, or anything in between.

Listen to the performance from the 10th Anniversary Gala Concert:
Sonata for Saxophone and Piano, Op. 29 (II: Allegro energico) by Robert Muczynski