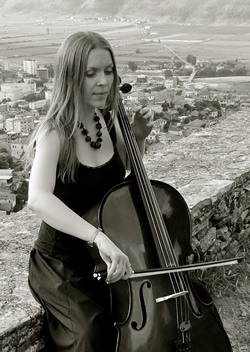 Elizabeth Knudson is a Vancouver-based composer, cellist, music instructor, and an Associate of the Canadian Music Centre. She holds a Bachelor of Fine Arts degree from Simon Fraser University, and a Masters degree from the University of British Columbia.

As a cello instructor, Elizabeth has been teaching privately since 2006, as well as working as a regular substitute instructor (cello, and chamber music coaching) at Saint James Music Academy in Vancouver, since 2010. Elizabeth is also a founding member and cellist of the Syrinx String Quartet (established 2004), and has been on tour as an orchestral performer to Albania, Macedonia, Kosovo, and Montenegro.

As a composer, Ms Knudson has been the recipient of a couple of national awards, including the Barbara Pentland â€śOutstanding Compositionâ€ť award, through the Canadian Music Centre. Her works have been performed by soloists, chamber ensembles, choirs, and orchestras, in over ten countries. Elizabeth is currently composer-in-residence of the Canadian all female ensemble, Allegra Chamber Orchestra.