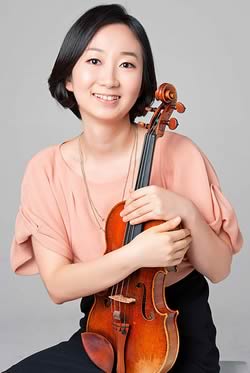 Dr. Lucia Hyunsil Roh holds a Bachelor of Music Degree in Violin Performance with distinction from the Eastman School of Music, a MasterŌĆÖs of Music degree from the Shepherd School of Music at Rice University and a Doctor of Musical Arts from the University of Wisconsin (Major: Violin Performance, Distributed Minor: Music Education and String Pedagogy). Also, she received Suzuki TeacherŌĆÖs Training Certification in San Diego. In 2011, Lucia was selected as a Teaching Artist of El Sistema from the Korea Arts and Culture Education Service where she participated in research and editorial supervision for orchestral repertoires and presented masterclasses for instructors of El Sistema-Korea for developing their teaching skills.

Lucia enjoys a multiŌĆÉfaceted career as a recitalist, chamber musician, and orchestral player throughout North America, Europe, and Asia. Some of LuciaŌĆÖs highlights include Lecture recital at International College Music Society, and debut recital at Sejong Hall in Korea. During 2007-2010, she was a tenured member of the first violin section with the Madison Symphony Orchestra. In addition, she served as the concertmaster for the MSO annual Symphony Soup Concert to represent the elements of classical music for students in kindergarten through third grade. Her orchestral engagements have been with TIMF, Seoul Sinfonietta, Madri Chamber Orchestra, the Milwaukee Symphony, Wisconsin Chamber Orchestra, Elgin Symphony, and Madison Bach Musicians. Lucia has also appeared for many international festivals such as THY in Demark, The Music Academy of the West in California, National Institute Orchestra in Maryland, the Garth Newel in Virginia, and Chautauqua Institution in New York.

Dedicated to community outreach, she represented the Madison Symphony Orchestra and University of Wisconsin-Madison through live performances and education in elementary schools throughout Southeastern Wisconsin. Her passion for teaching could be seen through her chamber and orchestra sectional coaching at the Wisconsin Youth Symphony Orchestra, UW-Madison, and UCLA. She also taught at Music Makers, a non-profit organization in Madison, Wisconsin, and Sun-Hwa Arts School, Seoul ŌĆō a Foreign School that offered violin lessons to prepare for recitals, concerts, competitions, and auditions. Further, she has served on the jury of the Chang Won Competition, WYSO Concerto Competition, and Wisconsin Youth Orchestra Auditions.

Lucia has studied with David Perry, Kathleen Winkler (notable pupils of most distinguished pedagogues, Dorothy Delay at Juilliard School and Josef Gingold at Indiana University respectively), Felicia Moye (an assistant of Ivan Galamian at Juilliard School, currently a Professor at McGil University), Oleh Krysa (a prominent student of the legendary David Oistrakh), and Alyce Cognetta Berts (a student of Syoko Aki of the Yale University).