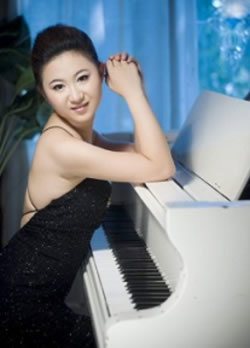 Chinese-Canadian Pianist Jenny Dou has been praised for her beautiful tone colour, virtuoso technique, and unique artistic individuality. She holds degrees from University of Minnesota in piano performance with a secondary area in pedagogy and education, where she studied with Prof. Alexander Braginsky and Dr. Rebecca Shockley. Holds both Masters and Undergraduate degrees in Piano performance with an acdamic gold medal under the tutelage of Prof. Alexander Tselyakov, at Brandon University, Manitoba, Canada.

As a virtuoso pianist, Jenny made her debut concert at Eckhardt-Gramatte Hall in 2006 and followed by numerous solo and chamber recitals and festivals across Canada, United States, and China. In 2009, she played concert tour with Prof. Tselyakov in Beijing, Wuhan, and Dalian organized by Canadian Embassy and China Centre Music Conservatory in Beijing. Her major competitions include: The winner of Performance Major Competition at Brandon University, School of Music ; MRMTA in Manitoba; Inaugural Knigge National Music Competition; Finalist of E-gre contemporary music competition; Minnesota Schubert Club Piano Competition. She also worked as pianist in Clearlake Chamber Music Festival in Manitoba, Round Top music festival in Texas, and performed regularly in Pender Harbour Chamber Music Festival and Vancouver Island Chamber Music festival, B.C. Since she moved to Vancouver, Dr. Jenny also has devote her time and energy to mentoring the next generation of musicians and music lovers.
Dr. Jenny has held both collaborative and teaching positions in Brandon University and University of Minnesota. She is currently a member of faculty at Mozart school of Music, also maintain a private studio in Vancouver.

Dr. Jenny has taught students in all ages and levels in both classroom and private settings. Many of her students has been top prizewinners at at local and regional performance events and competitions in North America and China.