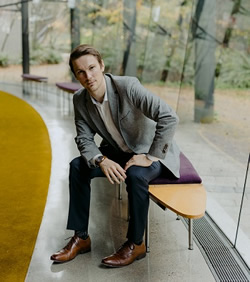 Renowned Canadian concert pianist Clinton Giovanni Denoni has performed throughout North America and Europe in the worldâ€™s most prestigious concert halls. â€śMr. Denoni is intensely musicalâ€ť notes Vovka Ashkenazy. Internationally acclaimed pianist Shoko Inoue remarks that â€śClinton has a limitless ability to strive for the hidden beauty found within each piece of music. Clintonâ€™s complete dedication to his art, no matter the cost, is inspiring. He has a mastery of technique and control on the piano that few have. Clinton pours characteristics of life and profound depth, which comes directly from his genuine heart, into every piece of music he touches.â€ť

After receiving his Bachelor of Music degree in 2012 from the Glenn Gould School of Music and the University of Victoria, Mr. Denoni graduated with his Master of Music degree in Piano Performance from the Cleveland Institute of Music in 2014. During this time, he had the privilege of collaborating alongside renowned musicians including Daniil Trifonov in performance masterclasses. Mr. Denoniâ€™s most recent solo orchestral engagements include The Chilliwack Symphony Orchestra, Thompson Valley Orchestra and Orchestra Philomusica performing Griegâ€™s A minor Concerto, Beethovenâ€™s Concerto No. 1 and Mozartâ€™s Concerto No. 21, respectively. In the summer of 2018, Mr. Denoni was a guest artist and clinician at The Eckhardt-GramattĂ© Conservatory of Music at Brandon University, where he performed with his wife, Erica Denoni, taught performance masterclasses and lectured on Dalcroze Eurhythmics. In July of 2019, Mr. Denoni was a semi-finalist and the sole Canadian representative at the International Keyboard Odyssiad Competition in Fort Collins, Colorado.

Mr. Denoniâ€™s students have been top prize winners in competitions throughout British Columbia, including the Vancouver Kiwanis Festival, the BCCM Music Festival, the Chilliwack Lions Club Music and Dance Festival, the White Rock City Orchestra Piano Extravaganza and Performing Arts BC. Additionally, his students have been featured performers with the White Rock City Orchestra and, in May of 2022, the Vancouver Chamber Orchestra. Mr. Denoni is dedicated to supporting young musicians and to helping strengthen the arts community where he grew up and throughout the world. Consequently, he helped organize and perform in two benefit concerts in 2019 that raised $5,500.00 for the Hope Secondary School music department, Hope and District Arts Council and Seeds of Hope Childrenâ€™s Ministry.

Currently, Clinton Giovanni Denoni is directing, producing and recording a cinematic narrative featuring one of Chopinâ€™s greatest works. This film, which will be released in the spring of 2022, portrays the triumph of light over darkness and the sublime connection between music and its mirrored image in nature. Mr. Denoni is actively teaching both privately and on faculty at Mastery School of Music in Vancouver, British Columbia, Canada as well as adjudicating, recording, and performing abroad.