The KodĂˇly method uses a child-developmental approach to sequence, introducing skills according to the capabilities of the child. New concepts are introduced beginning with what is easiest for the child and progressing to the more difficult. Children are first introduced to musical concepts through experiences such as listening, singing, or movement. It is only after the child becomes familiar with a concept that he or she learns how to notate it, similar to methods like Suzuki and Simply Music. Concepts are constantly reviewed and reinforced through games, movement, songs, and exercises.

The KodĂˇly method also includes the use of rhythmic movement, a technique inspired by the work of Swiss music educator Emile Jaques-Dalcroze. KodĂˇly was familiar with Dalcrozeâ€™s techniques and agreed that movement is an important tool for the internalization of rhythm. To reinforce new rhythmic concepts, the KodĂˇly method uses a variety of rhythmic movements, such as walking, running, marching, and clapping. These may be performed while listening to music or singing. Some singing exercises call for the teacher to invent appropriate rhythmic movements to accompany the songs.

Rhythmic concepts are introduced in a child-developmentally appropriate manner based upon the rhythmic patterns of their folk music (for example, 6/8 is more common in English than 2/4 so it should be introduced first). The first rhythmic values taught are quarter notes and eighth notes, which are familiar to children as the rhythms of their own walking and running. Rhythms are first experienced by listening, speaking in rhythm syllables, singing, and performing various kinds of rhythmic movement. Only after students internalize these rhythms is notation introduced. The KodĂˇly method uses a simplified method of rhythmic notation, writing note heads only when necessary, such as for half notes and whole notes.

The KodĂˇly method uses a system of movable-do solfege syllables, in which, during sight-singing, scale degrees are sung using corresponding syllable names (do, re, mi, fa, so, la, and ti). The syllables show function within the key and the relationships between pitches, not absolute pitch. 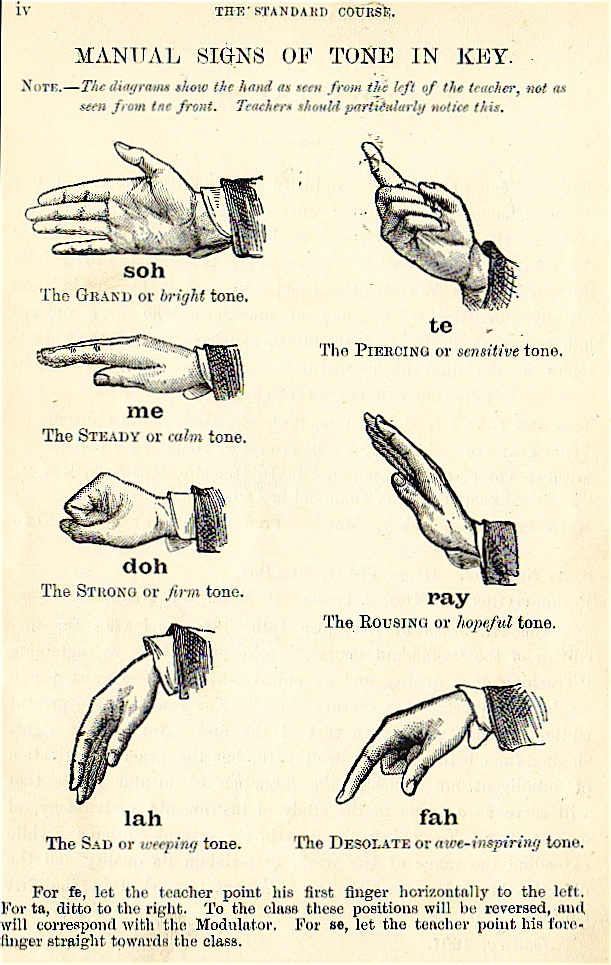 Depiction of Curwen’s Solfege hand signs. This version includes the tonal tendencies and interesting titles for each tone.

Hand signs, also borrowed from the teachings of Curwen, are performed during singing exercises to provide a visual aid.This technique assigns to each scale degree a hand sign that shows its particular tonal function. For example, do, mi, and so are stable in appearance, whereas fa and ti point in the direction of mi and do, respectively. Likewise, the hand sign for re suggests motion to do, and that of la to so. KodĂˇly added to Curwenâ€™s hand signs upward/downward movement, allowing children to actually see the height or depth of the pitch. The signs are made in front of the body, with do falling about at waist level and la at eye level. Their distance in space corresponds with the size of the interval they represent,