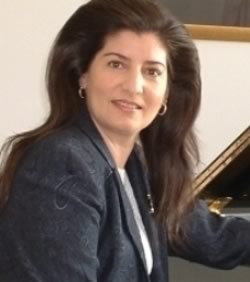 Ildiko Skeldon instructs students encompassing all grades and levels. In recent years Ms Skeldon has focussed her attention on intermediate and senior-level repertoire but still enjoys teaching some beginners as well.

Ms Skeldon’s students have been showcased in a variety of community concert and orchestra series and young artist concert series. Her student, Kenneth Lee, was the first student to represent Richmond in twenty years at the BC Provincial Piano Competition.

Ms Skeldon has had many memorable instructors during her summer studies at the Liszt Academy of Music in Budapest, Hungary throughout the 1970s. Her first inspirational teacher in Canada was Audrey Mallinson. Influential teachers during her university years were Kum-Sing Lee, Dale Reubart, Robert Rogers, Robert Silverman, Pawel Checinski, Ivan Moravec, and Anton Kuerti.

Ms Skeldon has presented teacher workshops on all levels of solo repertoire and on new repertoire in Royal Conservatory series; numerous master classes throughout the lower mainland of British Columbia; workshops on developing the technique, ear, and sight requirements of The Conservatory syllabus; and countless mock examinations for a variety of teachers and schools.

She has adjudicated extensively throughout the provinces of British Columbia, Alberta, Saskatchewan, and Manitoba at the beginner, junior, intermediate, and senior levels. Her adjudications include solo, ensemble, concerto, and composition classes. Ms Skeldon feels honoured to have been asked back to adjudicate by numerous festival committees, including a number of Kiwanis festivals.

2002 marked the release of her solo CD entitled “Live.” Featuring selections of live performances encompassing two decades of her performing career, the selections reflect the scope and emotional content of her performances. Ms Skeldonâ€™s students have also recorded three well-received piano duet (one piano four hands) CDs, “Dynamic Duettists,” showcasing a broad spectrum of styles and genres.
From 1991 to 1997 she served as the President of the Richmond Branch Registered Music Teachers and was their provincial delegate for over twenty years. Currently she is a Member-At-Large Advisor on the Executive of the Richmond Branch and she is also a long-time member of the Canadian Music Festival Adjudicators’ Association.

Ms Skeldon has recently been bestowed the honour of being appointed an International Judge for the World Piano Teachers Association – International Piano Competition.

Her teaching methods include traditional and European approaches and her philosophy is to ensure that each and every student achieves his or her own personal best. Ms Skeldon feels it is her job to bring that potential out of each student using a variety of different methods and incentives. Every studentâ€”young or oldâ€”has some level of musical ability, and she is thrilled with the challenge to be able to develop and bring that out of each student.