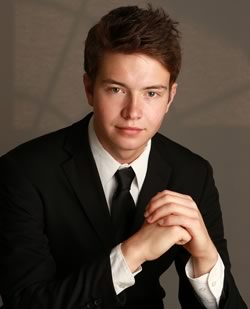 American pianist Gabriel Landstedt has appeared in national and international festivals such as the Klavierfestival Lindlar in Germany, Salzburg Mozarteum International Music Academy, Val Tidone International Music Festival, Brindisi Piano Camp in Italy, Eastern Music Festival, New Mexico Chamber Music Festival, and Southwest Piano Festival. Awarded First Prize in the 2012 Jackie McGehee Young Artists’ Competition, Landstedt made his orchestra debut with the New Mexico Philharmonic, performing Beethoven’s Piano Concerto No. 5. He also won First Prize in the Music Teachers National Association (MTNA) New Mexico State Piano Competition (Senior Division) in 2011 and 2012. In 2016, Landstedt recorded Shostakovich’s Piano Concerto No. 1 with the Albuquerque-based Duke Symphonette. He made his New York debut in 2017 and has performed solo and collaborative recitals throughout the United States, particularly in the Southwest where concerts were organized by societies such as Chatter ABQ, the Music Guild of New Mexico, and the Albuquerque Youth Symphony.

Landstedt began studying piano with his mother at age five and was accepted to the studio of Falko Steinbach at the University of New Mexico at age fourteen. Landstedt graduated with a Bachelor of Music degree and Second Major in German from the University of New Mexico in 2016. He has made additional studies at the Hochschule für Musik Würzburg in Germany with Markus Bellheim and Silke-Thora Matthies and the Manhattan School of Music with Arkady Aronov. He received his Master of Music degree at UBC under Mark Anderson and is currently pursuing his Doctor of Musical Arts degree as a recipient of UBC’s premier Four Year Fellowship.

Landstedt believes that artistic expression and natural, fluid movement are the core aspects of piano-playing, and he believes that these things can be achieved at any age. He has taught students of all ages and levels, and he focuses on increasing students’ love for music and their confidence in themselves. He is a former faculty member at the New Mexico School of Music and has taught privately for many years.