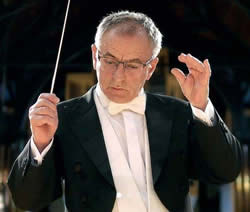 Albanian-born, multi-award-winning conductor Bujar Llapaj is a prominent figure in the Balkan classical-music scene. He received his formal training at the Academy of Arts in Tirana, Albania and the Conservatoire National de Rueil Malmaison in France. In 2008, he was appointed the Principal Conductor of the West Coast Symphony Orchestra in Vancouver, British Columbia. Having conducted concerts throughout Europe, he still travels abroad as a guest conductor.

Bujar is known for his dedication to the pursuit of excellence in music and music education. As Artistic Director of the Albanian National Theater of Opera and Ballet, he showcased the music of renown composers, like Mozart, Rossini, and Verdi. He also hosted world premieres of the works of emerging Albanian composers. Founder of the New Philharmonic Orchestra in Tirana, he assumed the roles of both Artistic Director and Conductor. Before moving to Canada, Bujar was the Department Chairman of Conducting and Singing at the Academy of Arts in Tirana, where he developed new programs in conducting and pedagogy.